Role of individual in national development – Ananda can show the way

I am most honoured, greatly honoured, indeed distinctly honoured to be invited to present the Olcott Oration for 2011, this special year in which we celebrate the 125th anniversary of the founding of Ananda College by Colonel Henry Steele Olcott. I cannot think of a higher honour that my school could have conferred on me.

The values that Ananda College, along with my parents, instilled in me gave the foundation on which I have built my life; thus I accept this invitation with humbleness, with gratitude, and indeed with pride, as well as great respect for the others that could have been invited to be the orator. I can only wish that my father, P. A. Wirasinghe, who was Vice Principal of Ananda College for many years, and my Colonel Henry Steele Olcott mother, Pearl Wirasinghe, who was a legendary teacher at Visakha Vidyalaya, could have been here. My three daughters, two sons-in-law, two grandsons and two granddaughters could not be here today. But I know that they are here in spirit; indeed my daughters were kind enough to provide advice on this oration for me. We have no sons. But if we did, they would surely have spent at least a few semesters at Ananda College as visiting students so they could absorb some of the greatness of this institution! 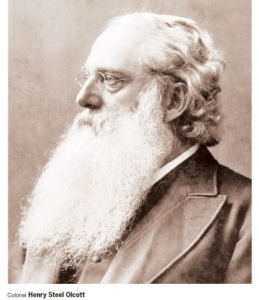 It is important for all of us to reflect on national development in Sri Lanka at this crucial time in our history. The country is doing very well despite being paralyzed by a civil war for about 30 years. A good number of our citizens are incredibly productive people. However, I believe that we can and must contribute ideas as to how national development can be achieved through individual actions. My main thesis is that individual citizens play the most crucial role in developing a country. To quote Einstein, “All that is valuable in human society depends upon the opportunity for development accorded the individual”.

My associated thesis is that such citizens are produced through the educational process.

I would like to consider the life of Colonel Olcott in some detail at the outset, not because we do not know much about him, but in the spirit of what lessons we can learn from his life, I must acknowledge that many of my learnings came from reading his biography: ‘Yankee Beacon of Buddhist Light’ by Howard Murphet (1), Olcott Thuma (in Sinhala) by Lal de Mel (2), communications (3) with the archivist and staff at New York University that Olcott attended, as well as multiple web postings. 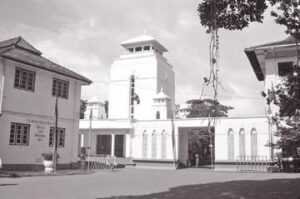 The Olcott family motto was ‘Vigilate’ or ‘be watchful’. That is encompassed within the great Buddhist motto: ‘Be Mindful.’ Being mindful of all that we say or do is crucial for development. Olcott, a 7th generation American, was born on August 2, 1832, the name Steele following the custom of giving the mother’s maiden name to the 1st born son. My research uncovered that Olcott attended New York University for three years from 1847 to 1850; not for one year as previously thought. He lived at 30 Clinton Place in New York from 1847 to 1849 (now 8th Street between Bowery W and 6th Ave) and in Gramercy Park from 1849 to 1850 (3). Olcott did not graduate from New York University and left due to financial hardship experienced by his family. Despite this setback, he did not feel sorry for himself; instead Olcott worked as a farmer, studied scientific agricultural techniques, and later opened an agriculture school. The lesson to be learned is that Olcott never ever gave up and learned to study on his own. Olcott’s first book, one on sugar farming, was published when he was in his mid twenties. It is important to note that it was his ability to write well that propelled him on his way to being an influential man. After the farm school closed, Olcott worked as the agricultural editor for the New York Tribune and a British magazine. He went in disguise to the deep south of the US to cover a controversial story about a hanging, at a time just before the American civil war when New Yorkers were not welcome. He barely escaped being lynched himself. Olcott thus showed that he was willing to take a calculated risk.

In April 1860, Olcott married Mary Eplee Morgan. The couple had four children, one daughter and three sons. Only two of the children, both sons, survived. The Olcotts were later divorced, apparently at the wish of Mrs. Olcott who was a devout Christian, whereas Henry was already not. Olcott continued to support his ex-wife and children. Thus we learn that duty was important for Olcott.

Olcott joined the Federalist forces during the American Civil war as a Signals Officer. It is unlikely that he saw any action. According to Murphet (1), Olcott enlisted because he strongly believed in… “(a) the abolition of slavery (b) industrial progress and (c)the solidarity of the nation through the continuance of the American federation.” Let us transfer that philosophy to contemporary Sri Lanka and the belief in (a) abolition of terrorism, (b) national development, and (c)solidarity of the historic unitary nation of Sri Lanka, and we can see why so many fought valiantly and gave their life in the recent Sri Lankan civil war.

Olcott met some very senior army officers who were impressed by his work ethic and honesty. He was given the rank of Colonel and appointed as a Special Commissioner of the War Department to investigate corruption in the Union Army. It is noteworthy that Olcott was recognized for his honesty and given the rank of Colonel to be a fighter of corruption. Later, Colonel Olcott was appointed to a three-man commission to investigate the conspiracy behind the assassination of President Abraham Lincoln. That is Olcott’s closest connection to mainstream American history. After Olcott’s work for the Federal Government, many testimonials were written regarding his… “ability, zeal, faithfulness to duty, capacity, rapidity, reliability, and uprightness of character,” I ask you today, should not all Anandians, indeed Sri Lankans, be educated to emulate Olcott?

Olcott – the agriculturist, Olcott – the reporter, Olcott – the editor, Olcott – the army officer and Olcott – the special commissioner now went back to his studies and became a lawyer in 1868. He built up thriving law practice in New York. Can we also train Anandians and Sri Lankans to continue to educate themselves and be ready for, and seek, career changes that inevitably come if one wants to be successful.

Olcott developed a belief in … ‘spirits, seances, mediums’ and entities called ‘elemental spirits’, i.e. entities that had not yet been born in the conventional sense, though he tried to investigate them with scientific methods. He came under the influence of a Russian woman called Helena Blavatsky who claimed many super natural powers. More than a decade later, the British based Society for Physical Research who investigated her called her an ‘imposter’.  This interest in the occult by Olcott and many other prominent Americans led to the formation of the Theosophical Society in 1875 with Olcott as the President. ‘Theosophy’, probably a combination of ‘theology’ and ‘philosophy’, had no special meaning. In his inaugural address Olcott said the following: ‘This society consecrates itself to … the study of truth, … and binds itself to allow nothing to stand in the way. Come well, come ill, my heart, my soul, my mind, my strength are pledged to this cause’

(1). We owe it to this great man to follow that philosophy of seeking and studying the truth even If it means disagreeing with some of his beliefs. This is especially important in today’s Sri Lanka where even the educated classes are increasingly filled with superstition, what the Buddha called Mithya-drushti, or wrong beliefs.

By late 1876 the American Theosophical Society was dwindling away with only the Colonel and Blavatsky being active. However, a British branch had been formed. The Society was under attack from various sectors of American society including organized religions and scientists. Thus they decided to move the Society to India. Olcott obviously had a World Outlook.

Considering his past services, the US President provided him with a diplomatic passport as an honorary ambassador. They set sail from NY to London on the ship CANADA on December 17, 1878. They set up house in Bombay and travelled widely in India giving lectures and meeting prominent Indian and British people. Initial financial problems in India came to an end when ‘The Theosophist’ magazine was launched in 1879. We can all learn from Olcott’s entrepreneurial spirit: the founding of a farm, an agricultural school, a law practice and a magazine.

Olcott’s arrival in Sri Lanka is well documented. He first took notice of Sri Lanka through a report on the Panadura Vadaya which was a three day debate between the Ven. Migettuwatte Gunananda and some missionaries. Thus impressed, as well as concerned about the atrocities being committed by the British, he sailed from Bombay and, after a 10 day voyage, landed in Galle on May 17, 1880. He took Pansil at a local temple and adopted the Buddhist philosophy.

He was feted by the local luminaries and greeted as a hero. It is said that the Panadura Debate and Olcott’s arrival was the beginning of a renaissance in Sri Lanka, parts of which by then had been under colonial rule for well over four centuries. Colonial imperialism, the worst ‘crime against humanity’ in the history of the world, as practised for example by the lawless Dutch and British East India Companies had been in full bloom.