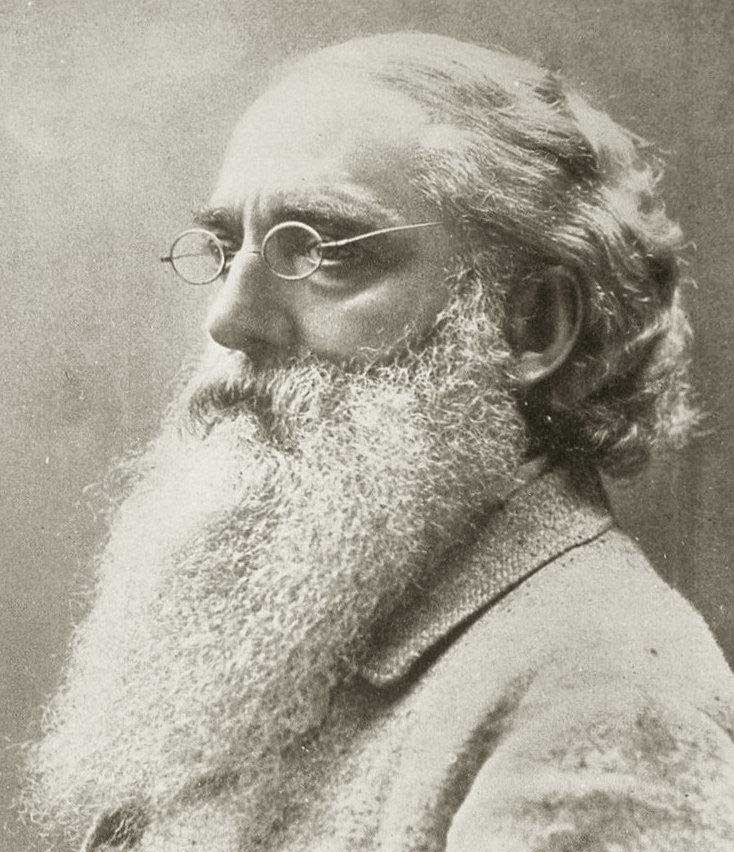 Colonel Henry Steel Olcott (August 2, 1832 – February 17, 1907) was an American military officer, journalist, lawyer and the co-founder and first President of the Theosophical Society. Olcott was the first well-known person of European ancestry to make a formal conversion to Buddhism. His subsequent actions as president of the Theosophical Society helped create a renaissance in the study of Buddhism. Olcott is considered a Buddhist modernist for his efforts in interpreting Buddhism through a Westernized lens.

Olcott was a major revivalist of Buddhism in Sri Lanka and he is still honored in Sri Lanka for these efforts. Olcott has been called by Sri Lankans “one of the heroes in the struggle for our independence and a pioneer of the present religious, national and cultural revival.” More ardent admirers have claimed that Olcott as a Bodhisattva.

Henry Steel Olcott was born in 1832 in Orange, New Jersey. Henry was the eldest son of six children born to a Presbyterian businessman, Henry Wyckoff Olcott and his wife, Emily Steel Olcott. As a child, Olcott lived in his father’s New Jersey farm. During his teens, he attended the Columbia University, where he joined the St. Anthony Hall fraternity, a milieu of well-known people, until his father’s business failed during 1851. Unfortunately, he had to leave the University since his father could not afford to pay the tuition fees.

In 1860 he married Mary Epplee Morgan, daughter of the rector of Trinity parish, New Rochelle, New York. They had four children, two of whom died in infancy. Olcott was the agricultural correspondent for the New York Tribune and The Mark Lane Express from 1858 to 1860, and he sometimes submitted newspaper articles on various other subjects. He also published a genealogy of his family that traced him back to Thomas Olcott, one of the founders of Hartford, Connecticut in 1636.

He served in the US Army during the civil war and afterwards was admitted as the Special Commissioner of the War Department in New York. He was later promoted to the rank of Colonel and transferred to the Navy Department in Washington, DC. He was well respected, and in 1865 when Abraham Lincoln was assassinated, Olcott assisted in the investigation. In 1868 he became a lawyer specializing in insurance, revenue, and fraud.

In 1874 he became aware of the séances of the Eddy brothers of Chittenden, Vermont. This aroused interest motivated Olcott to commission an article from the New York Sun, allowing him to investigate the Eddy Farms. His article was popular enough that other papers, such as the New York Daily Graphic, ran it. His 1874 publication of People from the Other World began with these early articles concerning the Spiritualist movement.

In 1874, while writing this series of articles, Olcott met Helena Blavatsky when both of them visited the Eddy farm. His foundational interest in the Spiritualist movement and his budding relationship with Blavatsky helped foster his development of spiritual philosophy. Olcott once described his adult faith as “pure, primitive Buddhism,” but this was a unique sort of Buddhism. Olcott continued to act as a lawyer during the first few years of the establishment of the Theosophical Society, in addition to being the financial supporter of the new religious movement.

The Theosophical Society built several Buddhist schools in Sri Lanka, most notably Ananda College in 1886 and Nalanda College, Colombo in 1925, Dharmaraja College Kandy in 1887, Maliyadeva College Kurunegala in 1888, Mahinda College Galle in 1892, Musaeus Girls College in Colombo and Dharmasoka College in Ambalangoda. Olcott also acted as an adviser to the committee appointed to design a Buddhist flag in 1885. The Buddhist flag designed with the assistance of Olcott was later adopted as a symbol by the ‘World Fellowship of Buddhists’ and as the universal flag of all Buddhist traditions. 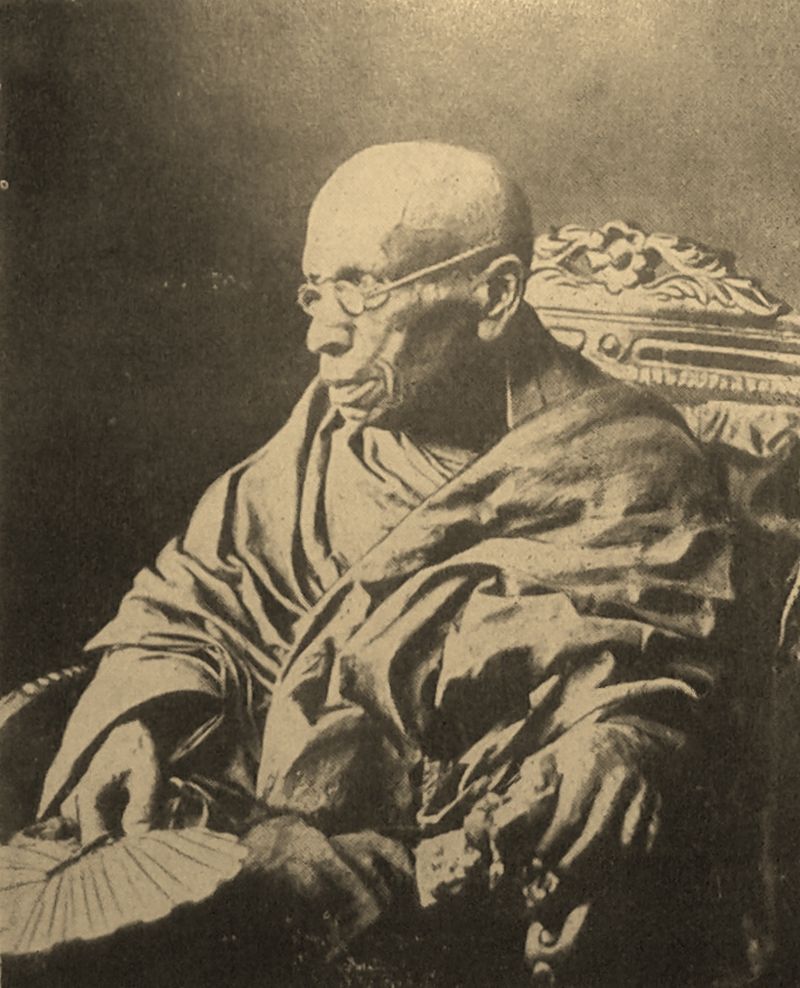 Ven. Hikkaduwe Sri Sumangala Thera was one of the pioneers of Sri Lankan Buddhist revivalist movement in the 19th century. He did a great service to improve Buddhist Education in the country and was the founder of Vidyodaya Pirivena, Maligakanda in 1873 which was granted university status later in 1959 by the Government of Sri Lanka. A veteran author and a fiery orator, he was a major figure in the ‘Panadurawadaya’, a religious debate held between Christian missionaries and Buddhist monks in 1873 at Panadura, Sri Lanka. He was well versed in Sinhala, Pali, Sanskrit, English, Buddhism, History, Arithmetic, and Archaeology and was one of the primary sources of information on Buddhism for the success of the Panadura debate.

The birth name of Hikkaduwe Sri Sumangala Thero was Don Nicholas Gunawardhana. He was born on 20th January 1827 to the family of Don Johanis Abeyweera, Hikkaduwa in Galle District. He was the 5th in his family and was baptized according to the general practice prevalent at the time. Young Nicholas received his primary education in Sinhala and Pali from the village temple, Hettigoda Thilakarama temple, Hikkaduwa under the tutelage of Ven. Hikkaduwe Sobitha Nayaka Thero and Ven. Mabotuwana Revata Nayaka Thero.

In 1848 he obtained higher ordination of Upasampada from the Malwatte Chapter, Kandy. Hikkaduwe Sri Sumangala Thero received his higher education at Parama Dhamma Chetiya Pirivena in Ratmalana, under the guidance of Walane Sri Siddhartha Mahathera. After gaining higher ordination of Upasampada he dedicated his life for the welfare of the world. He provided his services as a teacher at Parama Dhamma Chethiya Pirivena, Hikkaduwe Thilakaramaya, Bogahawatte Sudarshana Paramananda Viharaya, Kotahene Paramananda Viharaya.

In 1864 he was appointed as the Chief priest of the Sripada (Adam’s peak), the holy mountain of Sri Lanka. With this appointment he was unanimously recognized as the foremost Buddhist monk in the whole island. He was a leading figure of the Panadura debate (Panadurawadaya) held in 1873. It was after reading a report of this debate that Colonel Henry Steele Olcott visited Sri Lanka. Colonel Olcott learnt Buddhism and Pali under Hikkaduwe Sri Sumangala Thera, who guided him to establish many Buddhist schools in Sri Lanka, such as Ananda College, Colombo (1886), Mahinda College, Galle (1892) and Dharmaraja College, Kandy (1887). It was also in the presence of Hikkaduwe Sri Sumangala Thera, C. W. Leadbeater (first principal of Ananda College), an influential member of the Theosophical Society observed the Three Refuges and the Five Precepts of Buddhism and became a Buddhist.

In 1885 with the donation of a land area in Hunupitiya Colombo by, H. L. De Mel, a non-Buddhist, he was able to establish the Gangarama Temple. He was the chief monk of the Gangarama Temple and upon his demise he was succeeded by Rev. Devundara Sri Jinarathana Thero. Hikkaduwe Sri Sumangala Thera was the chairman of the ‘Colombo Committee’ which originally designed the Buddhist flag in 1885. 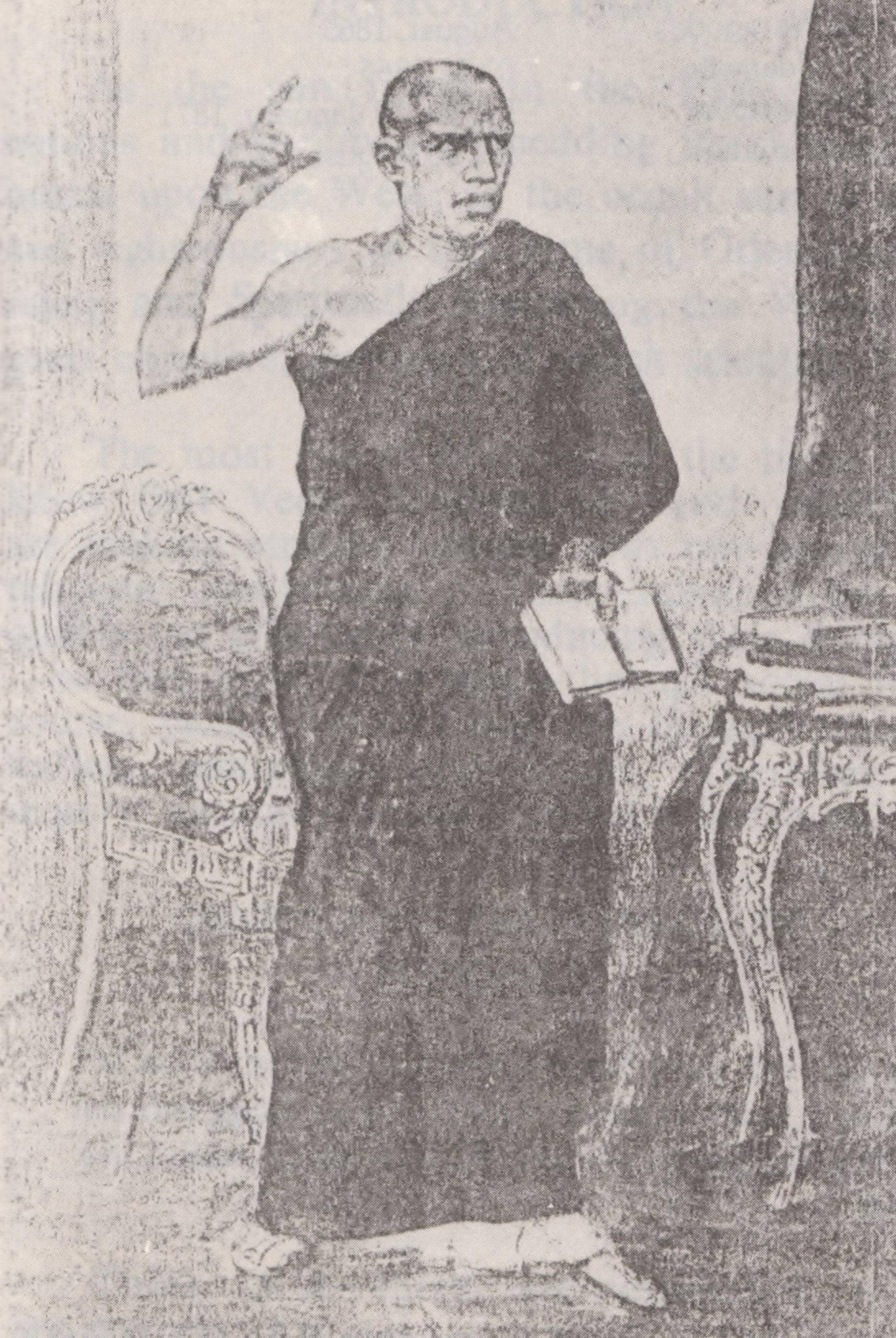 Ven. Migettuwatte Gunananda Thero is known for leading the Buddhist side in debates that occurred between the Buddhists and the Christians in Baddegama, Udanwita, Waragoda, Liyanagemulla, Gampola, and in the most famous of the debates in Panadura. As a result of the debates, Buddhism in Sri Lanka saw a revival.

He was born in 1823 in a village called Migettuwatta near Balapitiya to a rich Buddhist Salagama caste family. His name was Wanigamuni Migel Mendis Wimalarathna before becoming a Buddhist monk. He was taught first by his parents and exhibited oratory skills from a young age. He had close contact with a Roman Catholic priest who resided in a nearby church, and gained knowledge of the Bible and Christian doctrine. He had the intention of becoming a Christian priest but changed his mind after coming into contact with Buddhist monks of the nearby temples. He was ordained while in his twenties in the Dodanduwa Gala Uda Vihara by Venerable Thelikada Sonutthara Thera, the chief incumbent of the temple. Subsequently, he gained proficiency in Buddhism and oriental languages while he was in the temple.

The impact of the debate was phenomenal, both locally and internationally. Locally it was the principal factor behind reviving the identity and pride of Sinhala Buddhists. Internationally, it was instrumental in raising awareness of Buddhism in the west. After reading a copy of the book Henry Steel Olcott, the co-founder of the Theosophical Society came to Sri Lanka on 17th May 1880. With the arrival of Colonel Olcott the activities of the revival movement accelerated. Olcott had described Gunananda thera as;

the most brilliant Polemic Orator of the Island, the terror of the missionaries, with a very intellectual head, most brilliant and powerful champion of the Sinhalese Buddhism.

Gunananda Thera continued work to revive Buddhism in the country and had published many Buddhist periodicals which included Riviresa, Lakmini Kirana and Sathya Margaya. The Thera was also served in the committee that designed the Buddhist flag in 1885.